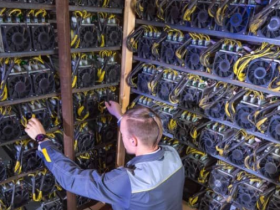 While the price of Bitcoin (BTC) falls, the difficulty of mining Bitcoin is expected to reach a new high, the highest it has been in eight months.

US cryptocurrency exchange Coinbase has announced that its Coinbase Pro platform would be shut down at the end of the year. However, the company stated that the process of discontinuance will be slow and gradual.

To begin with, Coinbase explained why Coinbase Pro was created before outlining the reasons for its discontinuation. As stated in a post, the Coinbase Pro team formed four years ago in response to market demand. Traders can use powerful technical analysis tools provided by Coinbase Pro. Because consumers don’t have to move between the Coinbase mobile app or web browser to place trades, they save time.

The CEO of Grayscale talks about what he thinks will happen with the Inverse Bitcoin ETF.

Coinbase Pro and Coinbase online or mobile app customers encountered issues shifting their balances between the two platforms. That’s why Coinbase redesigned its other two products so that they could include all of the capabilities that were available in Coinbase Pro.

Coinbase Pro will be phased out as soon as these capabilities become available on the Coinbase web and mobile app. It is expected that these elements will be completed by the end of the year 2022, as planned.

Coinbase’s Advanced Trade was launched earlier this year. Unlike Coinbase Pro, this is a platform with updated Coinbase Pro capabilities. With the new features, traders may do a more thorough analysis of the market before making a deal.

Therefore, consumers of Coinbase Pro have everything at their disposal to conduct informed trade analysis and execute their trades. The new order flows make it possible for users to immediately execute their limit orders.

According to the Coinbase statement, further functionality will be introduced to the Advanced Trade platform. It’s already being worked on by the Coinbase development team. However, before Coinbase Pro is phased out, the company aims to build and add new features.

For the time being, the Coinbase Pro platform is the only place where consumers can access Coinbase Pro’s full set of capabilities before Coinbase integrates them into its other products. The progress of Advanced Trade will become clearer to Coinbase users over time.

Coinbase Pro users will be able to access their assets on the Coinbase online or mobile app platform, the exchange has announced. In spite of this, Coinbase claims that the Advanced Trade can be used right away by its consumers.