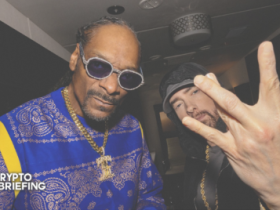 MTV will air a show with Eminem and Snoop Dogg with a BAYC theme.

Litecoin (LTC) transactions that use the unique MimbleWimble (MWEB) update will no longer be supported by Binance, a well-known crypto-exchange. Because Binance cannot authenticate the sender’s address, any transfer made using the MWEB method will be lost forever, according to the exchange.

The announcement comes just a few days after South Korea’s most important crypto exchanges delisted LTC because of the latest upgrade, which keeps the information of any transfer private. The delisting came just a few weeks after a warning was issued by five cryptocurrency exchanges, including Binance. South Korea has tight privacy rules that limit the use of bitcoin exchanges for anonymous funds transfers, so the delisting isn’t a huge surprise..

A few and a half years after its initial proposal, LTC’s MWEB upgrade was one of the most significant updates performed this year. The LTC blockchain’s scalability is increased by a number of privacy measures that are incorporated in the upgrade. MWEB Litecoin transfers were also discontinued on the well-known crypto trading platform Gate.io, which claimed that it does not enable anonymous transfers.

Binance US faces a class-action lawsuit over the sale of UST and LUNA contracts.

In this review, we’ll reveal whether or not we think Scandinavian Capital Markets is legit or scam.

The well-known crypto exchange’s decision to end support for the MWEB update comes at a time when various scandals have been surrounding the prominent crypto exchange for a long period of time as well. Binance has been accused by Reuters of facilitating unlawful transfers of up to $2.5 billion in the past few days. Binance CEO Changpeng Zhao (CZ) immediately refuted all of these allegations, citing Chainalysis evidence in his denial (a blockchain analytics company).

According to Chainalysis, 0.15 percent of all crypto transfers in 2017 were tied to some criminal enterprise, CZ tweeted on 7th June. In addition, he said that between $800 billion and $2 trillion was linked to criminal activities. As a result, he argued, Reuters should provide accurate data.

Also, the US Securities and Exchange Commission (SEC) began an investigation into the Binance BNB ICO sale in 2017 to see whether there was any possible Security violation. For one of the most popular cryptocurrencies, the privacy-related characteristic proved to be a major issue.